May 24, 2018  Cultural Center at the Opera House Wins Preservation Award

When Rebecca Jessop landed her first community theater role in her 20s, she knew immediately that she was hooked on the performing arts.

Jessop is now taking on a new challenge in the world of theater as executive director of the Havre de Grace Arts Collective. The job involves overseeing the new Cultural Center at the Opera House, which opened in early August after a three-year, $4 million renovation. In addition to attracting performers, she aims to bring artists to the center as part of the Havre de Grace arts and entertainment district. 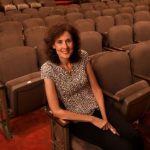